This lesson combines both Peter's Vision he had on the rooftop and continues with Peter traveling to see Cornelius and teaching him about Jesus.

Today we are studying about Cornelius found in Acts 10:1-48. He lived in Caesarea and was a centurion (captain of 100 men) of the Italian Regiment (military). He was faithful and feared God. He gladly gave gifts to the poor and he prayed a lot.

About 3 in the afternoon an angel of God came to him and said “Cornelius.” He was scared when he saw the angel! The angel told him that God has heard his prayers. The angel told him to "Send for Simon Peter and he will tell you what to do." The angel left and Cornelius told 2 servants and a soldier to go to Joppa to get Simon Peter. It was a 10 hour trip.

The next day, at about noon, Peter went to the housetop to pray. He was very hungry and he fell into a trance. He saw the heavens open up and something like a huge sheet tied by its four corners come to earth. It had all different kinds of animals, reptiles and birds on it. Peter wondered what that meant. This happened 3 times, and then went back up into heaven. (Acts 10:16)


While he was thinking about it, the 3 men sent by Cornelius asked if Peter was there. Peter went down and told them that he was the Peter they were looking for. After they explained why Cornelius sent them, Peter invited them into his house.


Peter got up in the morning and prepared to travel with Cornelius’ men.  Peter took 6 Jewish believers along with him (Acts 11:12) on this journey. They split the traveling into a two day journey from Joppa to Caesarea.

When they went into the house, all the people that Cornelius had invited were there to greet Peter.

(Acts 10:34) God sent Peter to teach Cornelius and his family. Peter told them that God doesn’t show favoritism. Everyone is treated the same in every nation that fears Him and is faithful to Him. He told them about Jesus and how He died. He said that we are commanded to preach to all people so all can go to Heaven.


The thing was that at any other time, Peter and Cornelius wouldn’t be seen together, especially talking to each other because it was unlawful for a Jewish man to associate with someone from another country. (Acts 10:28)

But when the people that were at the house of Cornelius heard what Peter had to say, they believed. The last verse (Acts 10:48) says that Peter told them to be baptized in the name of the Lord and then they asked Peter to stay for a few days with them. (Bible verse for today.)

These updated Roman Centurion posters can be used for any lesson with a centurion. The last poster is Cornelius. These are in color only. Click here to download. 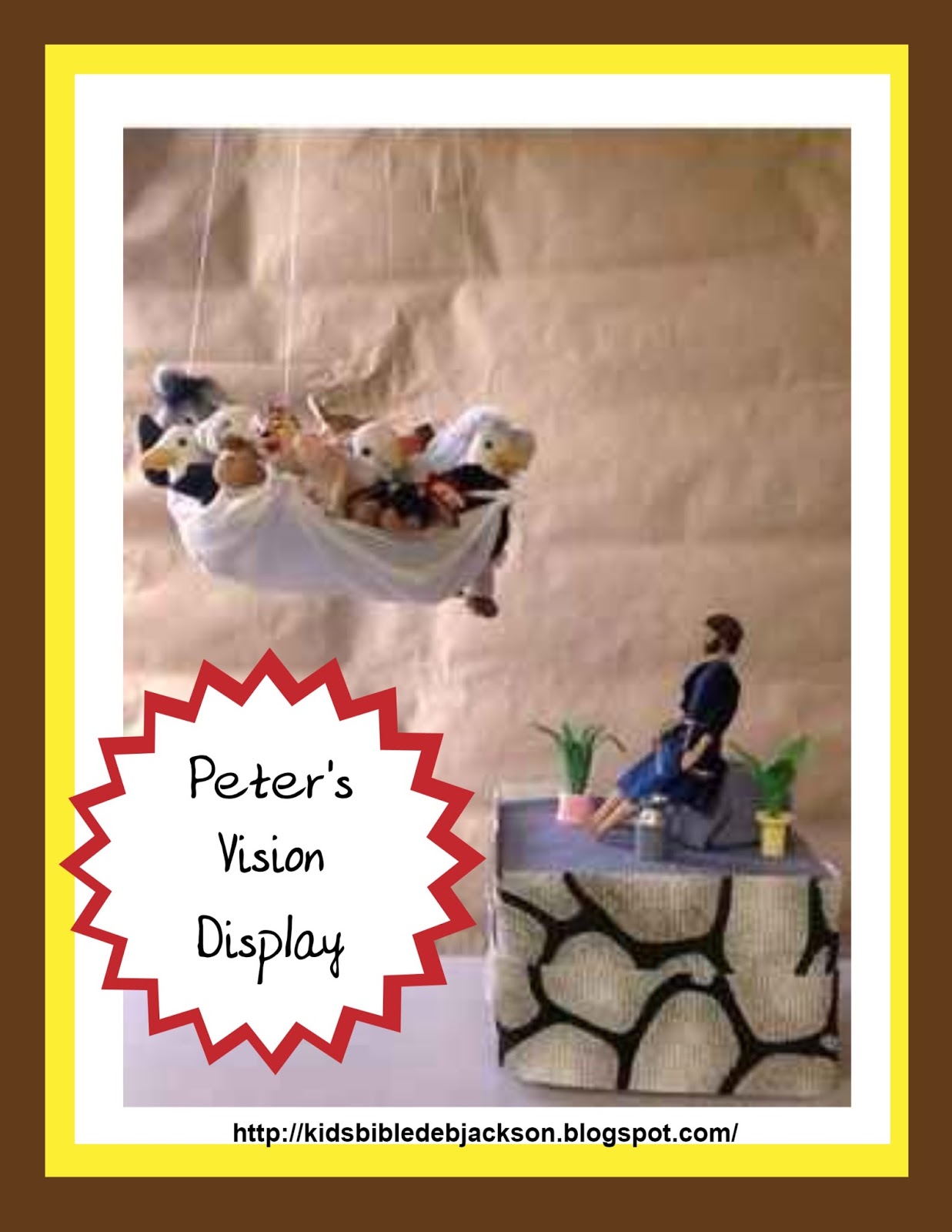 This is my visual for this week. The 'sheet tied by the 4 corners' is hanging from the ceiling. I used fishing line to hang it. There are 2 dowel rods that the sheet is tied to keep it from sagging, and the fishing line is tied around the dowel rods. Peter's housetop is a piece of plywood on dowel rod legs. 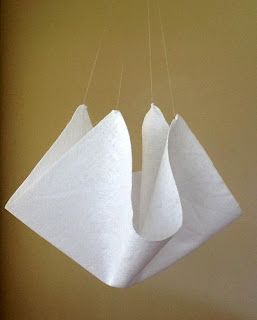 White fabric (that won't fray) cut into 12" large squares. This is about what I cut them. It depends on the fabric, and I just cut them to get the least amount of waste. In the picture, you see I used a white felt, and cut the squares into 18 inch pieces. 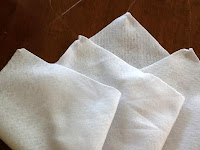 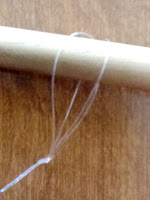 (Picture 1) Cut two 40" lengths of fishing line, and tie to the opposite corners of the 'sheet'. (Picture 2) I pulled the fishing line up in the center of both pieces, and made a loop to gather them. You can give the kids a dowel rod to hang it on to make it go up and down easier.

The students will add any animals you hand out and take home their animals they brought. (I sent a note home with them last week and sent email reminders during the week) They can raise and lower the sheet like the vision.

Click here to print the note from last week. 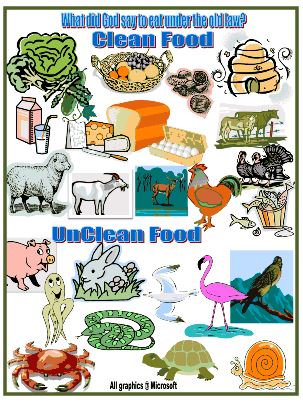 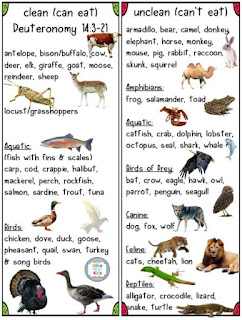 You can print the left clean vs. unclean worksheet by clicking here.

The chart on the right is an updated chart of clean and unclean animals. It is a very basic list with animals that are in the Bible or easily recognized animals. It is not intended to be an in-depth list. This includes the color and black & white. Click here to download.


This Bible lesson has so many good points that can be discussed. One point that Luke keeps making in Acts is that when people hear the Gospel, they believe in Jesus and immediately are baptized. Another, is that Jesus loves everyone and salvation is for everyone. Since those points are made repeatedly in the following lessons, I took this time to talk about some of the old laws from the Old Testament, and some of the new laws that came into effect when Jesus died on the cross.

We discussed the old law of sacrificing animals, and we are very thankful we don't have to do that! But, the new law includes baptism. We still worship, but the old law was on the Sabbath, being Saturday. Exodus 31:16  And, the new law on the first day of the week, being Sunday. (Acts 20:7)


We mostly talked about clean and unclean food. The food choices were part of the new laws. 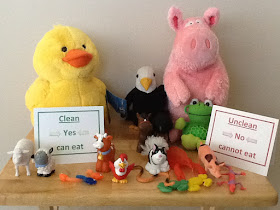 I had a bigger table and more animals, but this will give you an idea of what I did. I gathered up animals, even my granddaughters Fisher Price ones, and the kids looked at their charts and we put the animal with the correct tag.
You can print the clean and unclean tags here. 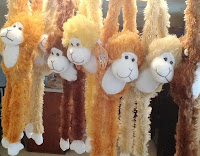 These hanging monkeys and the snakes are from Dollar Tree. They LOVE the monkeys! I hang them on my arms and let them pick their color. But, the object is to discuss the clean vs. unclean according to God. 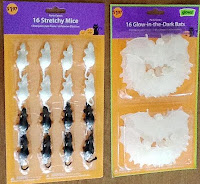 These rats and bats are only sold around October. The first packs are at Wal Mart, the second ones in the mesh bags are at Dollar Tree. They love those, because they glow in the dark! You can also use the black birds (ravens for Elijah) from Dollar Tree for several Bible lessons, and this is one of the lessons! 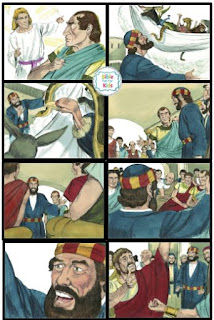 Click here to download the updated visuals as shown above.
The visuals are for Acts 10-11. Not all are shown. 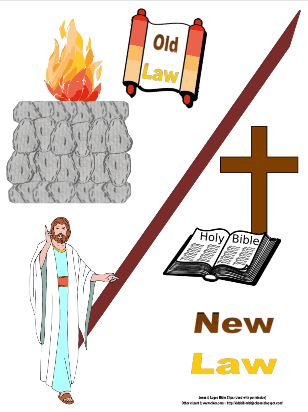 Scripture taken from the New King James Version®. Copyright © 1982 by Thomas Nelson.
Used by permission.
Bible Fun For Kids at 6:50 AM
Share