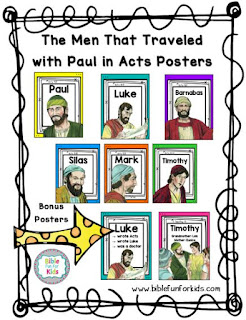 
Review: Last week Paul and Barnabas were in Antioch and Paul preached at the synagogue on the Sabbath (Saturday, old law). Remember that Paul told them about Moses and the 10 plagues and the 10 commandments. There were judges, then God gave them kings. They had Saul, then David, then Solomon, who was David's son.

Then Paul talked about Jesus. Paul talked about God’s plan and Jesus being raised from the dead. The old laws were done away with and the new laws since the death of Jesus are God’s plan for us.
Where do we find the old laws? Old Testament
Where are the new laws found? New Testament
And, what is the first book in the New Testament? Matthew
Who does Matthew tell us the birth of? Jesus

﻿
Remember that the people asked Paul and Barnabas to speak to them again the next week, so they did! Almost the whole town came to hear Paul speak! There were Jews and Gentiles that listened. The Gentiles were happy to hear what Paul said, but the Jews didn’t like it.

The Jews talked some of the chief men of the city into running Paul and Barnabas out of the town. Now Paul & Barnabas have traveled to Lystra. They have been traveling for a couple of years telling people about God.

Lesson: Scripture is Acts 14:1- 23. Paul and Barnabas went to Iconium to the synagogue there and talked to a lot of people. They spoke boldly about Jesus, and did “signs and wonders”, which is miracles- an instant act of God. Paul and Barnabus stayed in Iconium for a long time. They preached about Jesus without any fear and they did miracles to prove Jesus. (Acts 14:3)

The city was divided, some believed what they were saying and some didn’t. There was a violent attempt by both the Jews and Gentiles to stone Paul and Barnabas! (Acts 14:5) And when Paul and Barnabas became aware what was happening, they left and went to Lystra.

At Lystra, there was a man that has been crippled from birth. He has never walked. (Acts 14:8) He was listening to Paul preach the gospel. When Paul saw that he had faith to be healed, Paul said in a loud voice: “Stand up straight on your feet!” The man jumped up and walked!! Perfectly!! Think about this, he had never walked and now he’s walking like he’d always done it! He didn’t go for physical therapy or to a doctor for help in training, he got up and walked! That's a miracle! An instant act of God.

When the people saw this, they started to shout that the gods have come in the bodies of men. Not God in Heaven, but idols. Remember what God says about idols? One of the 10 commandments: Thou shalt not worship idols. (Exodus 20:3-5) We’ll talk more about idols in a later lesson.

The people thought that what they had done in curing the crippled man was so great that they thought they had to be some kind of Greek gods! The priest that worshipped idols, came with oxen so he could sacrifice the ox in front of the people.

When Paul and Barnabas heard about that, they tore their clothes and ran into the group of people asking “why are you doing this?” We are just normal men preaching about God Who created the heaven and the earth and everything in them.

The Jews from Antioch were there and they talked the people into stoning Paul. They dragged him out of the city and stoned him. Remember we talked about Stephen being stoned to death and Paul watching. Now Paul is being stoned. The people left Paul laying on the ground, thinking he was dead. But the Christians took Paul back to the city and the next day, Paul left with Barnabas and traveled to Derbe.

And when they had preached the gospel to that city and made many disciples, they returned to Lystra, Iconium, and Antioch, strengthening the disciples, encouraging them to continue to be faithful, telling them are many tests they would go through to be able to be in heaven. They prayed and appointed elders in every church. (Acts 14:13) 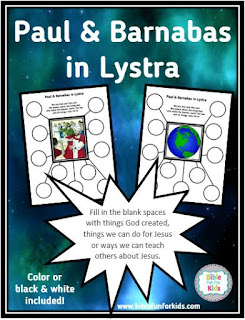 These discussion starter worksheets are in color and black & white. Students will write things that God in Heaven created. Click here to download. 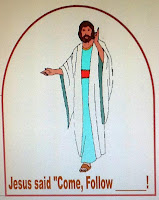 This is more of a discussion As-You-Go type booklet.
You can print the above book in color here.

And, I used Google Translator to make the Spanish. That is here.

And, last choice is the above book in English in black and white here.

And, the above book in Spanish in black and white here. 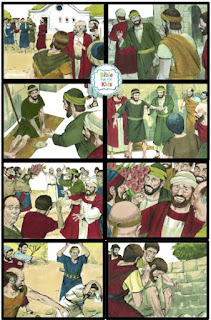 Click here to download the updated visuals.
This file includes all visuals for Acts 14.
All are not shown and a map is included.

Scripture taken from the New King James Version®. Copyright © 1982 by Thomas Nelson.
Used by permission.
Bible Fun For Kids at 6:38 AM
Share