This is the last lesson for the book of Acts! This is a review of the life of Paul. There is a booklet that I have used and have the kids flip through the pages with me and as I am telling the Bible lesson, I hand out a little item that will hopefully remind them of that part of Paul's life. They put the items in their Fact Bags to take home. This is another of the kid's favorite lessons! 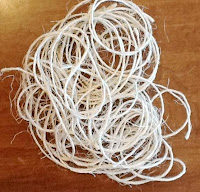 I begin the lesson by using the printed book. First is some background about Paul. Page 2 talks about Paul being born in Tarsus, and page 3 talks about his family and his dad being a tentmaker. The string is for tent making. You can print a baby here.

Page 4 discusses Paul going to school and the languages he learned. Then we begin reviewing what we studied. Stephen is first on page 5 and the book also talks about Paul getting permission to put the Christians in prison. I handed out backpack cutouts and you can print lips for the languages here.﻿

We were first introduced to Paul when Stephen was being stoned and Paul stood and watched. The people put their coats at Paul's feet. I handed out small rocks here.

Paul received permission to go into people's houses and drag them to prison. Acts 8:3-4 As for Saul, he made havoc of the church, entering every house, and dragging off men and women, committing them to prison. Paul approved of Stephen being stoned to death.Click here to print a letter.

Paul was blinded by the light on his way from Jerusalem to Damascus. A loud voice said "Saul, Saul, why are you persecuting Me?" After 3 days, when Paul had his sight back, he was baptized immediately, even before he ate! 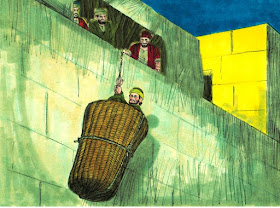 After 3 years, Paul returned to Damascus. There were some Jewish leaders that were now angry at Paul and planned to kill him. The Christians heard about their plans and Saul escaped in a basket down a wall. He left the city on foot. Print a basket here. 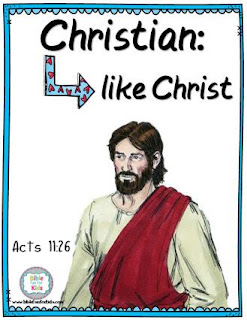 Click here to download.
Saul met with Barnabus and they went together to strengthen a new church at Antioch. This is where the people noticed that there were differences in the people following Christ, and so they called them Christians. (Acts 11:26) They stayed there for a year.

Paul and Barnabus traveled together teaching people about Jesus. They healed sick people. The people in Lystra thought they were gods because they could heal. They took Paul outside the city and stoned him. I handed out Band-Aids here. 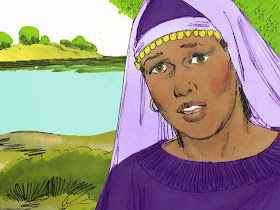 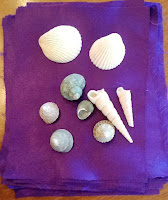 They worked with Timothy and met Lydia in Philippi. She made purple cloth.
I handed out small pieces of purple cloth and shells here. 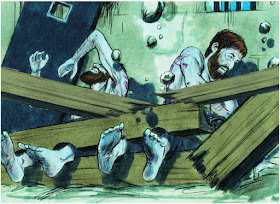 When Paul and Silas were put in prison, they were singing and praying. At midnight, God made an earthquake shake the jail and their chains fell off! The guard took them home and his whole family were baptized! (The music notes are to represent Paul & Silas singing in prison. I found these at the local teacher's supply store.) 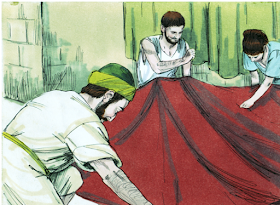 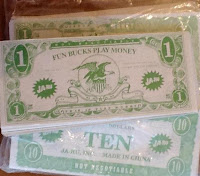 In Corinth, Paul made tents with Aquila and Priscilla. Paul wrote his first letter there. It was 1 Thessalonians. Paul also wrote 2 Thessalonians and 1 & 2 Corinthians while he was there. I found the packs of money at Dollar General. 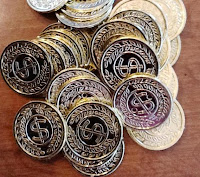 While Paul was in Ephesus, there was a silversmith that used silver to make idols of Diana. What does God say about that? Thou shalt not! Demetrius was really angry because he made a lot of money selling them, and there was pandemonium in the city. The coins are at Party City in a big bag of 144 coins.

When Paul was in Caesarea, a prophet named Agabus took Paul's belt and told him that if he went to Jerusalem, he would be taken prisoner. Did that stop him? Did that slow him down? Oh, no, he said that if that is God's will, he was more than happy to go to prison for God. I cut strips of fabric that wouldn't fray into strips. You can print a soldier here. 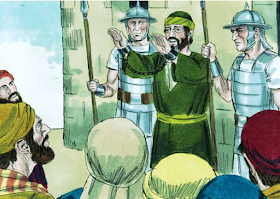 Paul did go to Jerusalem, and the people got so angry at Paul, that the soldiers took him as a prisoner for his own safety. The wild mob was trying to beat him to death, so the soldiers took him to the barracks. Paul told them that he was a Roman citizen, so they knew they had to be careful. (Handout the above soldier picture here) 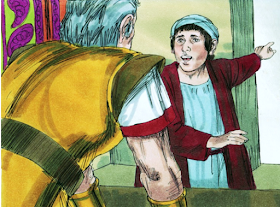 There were 40 Jewish men that planned to kill Paul. When Paul's nephew heard the Jewish leaders talking about killing Paul, 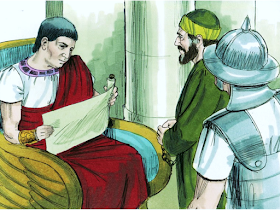 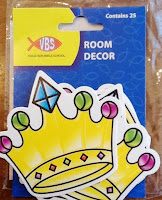 The soldiers took him to the Governor Felix during the night. He was in prison for 2 years until Festus took over. Festus heard Paul's case and then asked King Agrippa to hear Paul's story. (The crowns were at Dollar Tree, but crowns can be found at a teachers supply store.)

King Agrippa said to Paul: "Almost you have persuaded me to be a Christian." Paul said "I appeal to Caesar."

So Paul was put on a ship to Rome. Luke and some other friends traveled with Paul. The seas were really rough because it is autumn (fall). After 14 days of not seeing the sun during the day, or the stars at night, they saw land. Paul broke bread, said a prayer, and they ate to have the strength to swim to shore. (I hand out a boat here. [Next photo]) 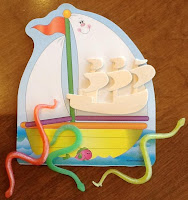 The ship hit a sandbar and the ship cracked in half. The soldiers unchained the prisoners and everyone swam to shore. The ones that couldn't swim, floated with a piece of the ship. They arrived on the island of Melita, now called Malta. The islanders built a bonfire to warm them. 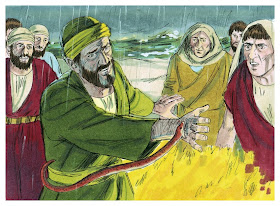 As the wood warmed up and Paul was gathering wood, a viper (poisonous snake) clamped on Paul's hand and he had to shake it off! The islanders couldn't believe that he wasn't showing any signs of snakebite! Paul healed people on the island, and after 3 months, the island people gave Paul a ship and everything they needed to finish their trip to Rome. (I hand out the vipers now in above photo)

When Paul finally got to Rome, he had his own place, but had guards. Paul didn't get to plead his case to Caesar for 2 years, and while he waited, he wrote letters and told people about Jesus. I printed the scrolls on a granite type paper. I added dowel rod and ribbon to tie it after it is rolled up.You can print it here.

This lesson will be effective to just use the booklet and not the handouts, but I this is what I like to do. As they fill the Fact Bag, they are reminded of each lesson they learned about Paul. When they go home and look through the Fact Bag, they should be able to remember and tell their parents what they studied. So, for each part of the lesson, you will see the visual picture and a picture of whatever I used to hand out. I either purchased it or printed it. Most of the printables will have links at the end of the corresponding paragraph. You can also put the items in the Fact Bag before class. You can hold up one item and show them what is in their Fact bag and give them the Fact Bag as they leave class.
Click here to download the Fact Bag Labels.﻿
Click here to download the teacher's visuals.
All visuals included except for Lydia. The free Lydia visuals are copyrighted and can be downloaded here.﻿

This is the book that the kids followed with me as we did the lesson. I wrote it like Paul is telling about his life, and I made sure to make it clear that I wrote it and not Paul. What I did for the downloads is put the 2 pages together that should be printed on the front and back of the same piece of paper. That makes 4 separate downloads to print the book. Click on the page numbers to print.
cover/last page   Pages 2-3 & 12-13  4-5 & 10-11  6-9

You can print today's worksheet here.
You can find all the Acts worksheets here.