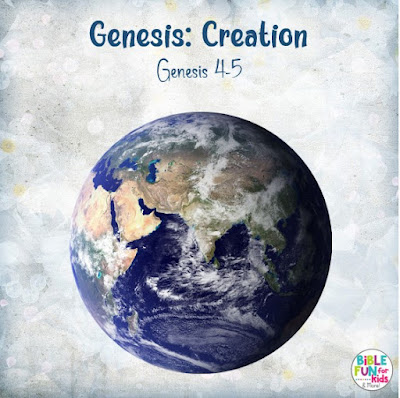 We are going to be studying the first book of the Bible. It is in the Old Testament and is called Genesis. Genesis means origin or beginnings, to come into being. It was written by Moses and the very first verse says: In the beginning God created the heavens and the earth. In this lesson, we are studying God's creation found in Genesis 1-2. 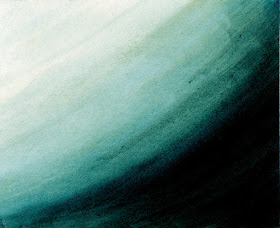 Day 1: There wasn’t anything, the earth was without shape and God said, “Let there be light.” What happened? There was light! God saw that the light was good, so He divided it from the darkness. Verse 5 says that God called the light ‘day’ and the darkness ‘night’.
What did God create on the first day? Light, Heaven, earth, day and night (finger light & earth ball) 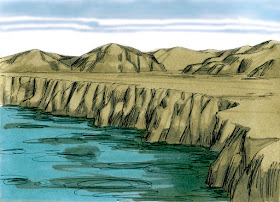 Day 3: On the third day, He put the water in one place, so the dry land appeared. God called the dry land Earth, the water that was gathered together God named Seas. And verse 10 says that God saw that it was good.
Now that there is dry land, God decided that there needed to be something growing there. God said, “Let the earth grow grass, herbs need to grow seeds and fruit trees need to make their own seeds.” Each one would make a seed that would keep coming back by making more seeds. And God saw that was good, too!
On the third day, God made…??  The land, grass, plants and trees, seas. (flower & grass) 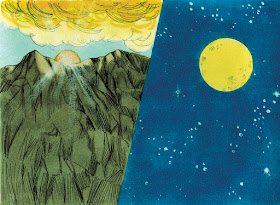 Day 4:  Next, God decided that there needed to be a light in the heavens. It would be used to have different seasons and separate days and years. God put in motion the earth’s rotation.
Then, God wanted a greater light for the day, which is? The sun and a lesser light for night, which is? The moon And He made the stars also. And God saw it was good.
On the fourth day, God made…?? Sun, moon and stars (foamy stars, moons, & suns)
Day 5: On the fifth day, God wanted the water to have lots of creatures living in it. He also wanted birds to fly in the sky. So, in verse 21 Moses tells us that God made every living thing that moves, and God saw that it was good, too. God said for them to reproduce and fill the waters and skies with more fish and birds!
On the fifth day, God made…?? Fish and birds (bird & fish) 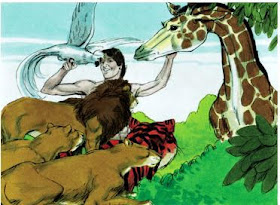 Day 6: God wasn’t done yet! On the sixth day, He made all the animals, from the big cattle to the little creepy things. Think of all the different types of animals that there are! God saw that it was good. (Snake, turtle & dinosaur)
Then, God made man to be over the animals. God took dust from the ground and formed man and breathed into his nose. And man became a living, breathing person. God called him Adam, which means father of all living. (Adam) 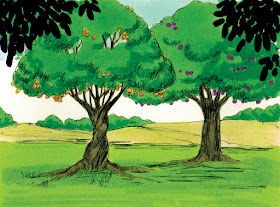 Then, God created a garden in the eastern part of Eden and put the man there. God made every tree grow. The trees were nice to look at and they were good for food. And in the middle of the garden, was the Tree of Knowledge of Good and Evil. There was also a river in the garden. God put Adam in the Garden of Eden and told him to take care of it. He said: “You can eat of every tree in the garden, except for the tree of the knowledge of good and evil. If you eat from that tree, you will die.” 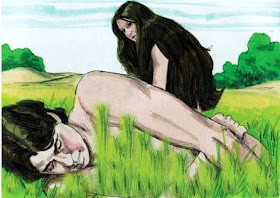 God formed the animals out of the ground and brought them to Adam and he gave them names. Then, God made Adam go into a deep sleep, and He took one of Adam's ribs and closed Adam back up. From Adam’s rib, God made a woman. God gave Adam the woman to be a helper. She was called Eve which means Mother of all living.
On the sixth day, God made…? Animals and Adam & Eve
Day 7: On the seventh day, God rested.
Click here to download the lesson and visuals in one pack.﻿ 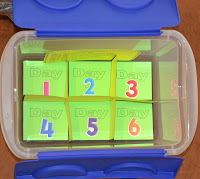 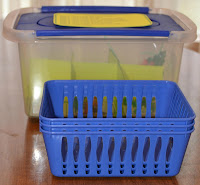 For this lesson, I purchased plastic containers, printed the daily divider, and as we talked about each day, I handed out something to represent each day's creation fact and the students added it to their box. You do not have to purchase items if you do not want to, everything you need is free on the printable download.
I found these really cute containers at Dollar Tree. I was looking for something different with a lid, and I found it! You can use any style container you can find, even the plastic baskets (like in the second picture). The inside bottom is 7.5 x 4.5, and that is what the printable is based on. Even though, it can be cut down smaller or larger. There is even a sheet that has the numbers in the center so you can print and fold up the edges to make your own holder. So, you don't even have to buy anything! 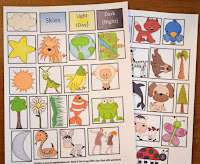 These are the printables for the six days. Everything is on the first set (page 4) that you will need, so you do not have to print the last page. But, they are really cute to add! They are made to cut between the pictures, so there is not as much cutting to do. I put them in library pockets so they would not be lost when the kids are not using them. 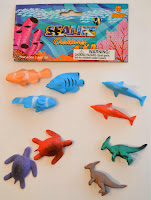 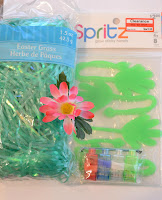 I did buy some extra hands-on items that I could find at Dollar Tree. You see the fish, turtles, sharks, and dinosaurs in the first picture. I also added frogs from my Moses stash! I did find some great small, coiled cobras at Party City for the snakes.
The second picture shows grass, flowers, a little light that straps on your finger (cute!) and the sticky hand. I found the sticky hand at Target because God made everything. And the finger lights are here (Also sold on Amazon).

I used cotton balls for the clouds and some foamy girl/boy for Adam and Eve. I purchased a space/planet theme foamy set for day 4 and used the stars, suns and moons for that day's handout.
You do not need to buy the extras, everything is in the printables, but I think it is more fun learning for the kids. About the grass, it was getting on my nerves flipping everywhere, so I squished some together and used Scotch tape to secure into bundles. You can print today's project here.
There is an extra worksheet (not shown) for the students to draw a line from each item created to the day it was created. You can print it here in color or black & white.
Click here to print in color.
Click here to print in B/W. 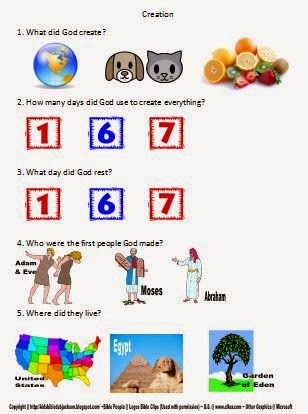 
You can print all the Genesis worksheets here. 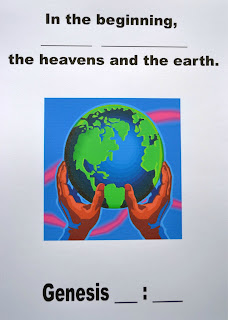 Click here to see the cut & glue worksheet that can be used by itself, or with the lapbook printables. 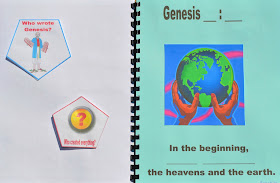 Here are the lapbook printables.
Who wrote Genesis?      Creation

Click here to see all the Genesis cut and paste worksheets and lapbook printables. 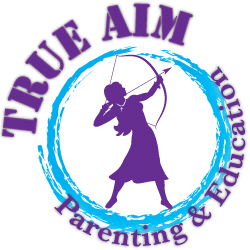 Yah! This was also featured here: 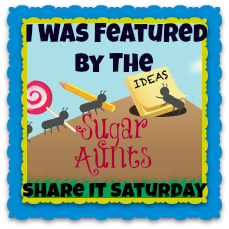