Genesis: Joseph Reunited With His Family in Egypt 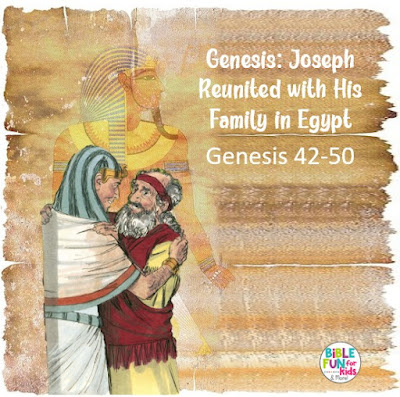 Today's lesson finishes up the book of Genesis and Joseph! Next quarter will be Moses and there is so much to learn from him! We continued our Joseph in Egypt lesson with the kids wearing the Egyptian outfits. There is a quick printable project for today. It is a good reminder to love God no matter what is happening in your life. Joseph stayed faithful while he was a servant and stayed faithful even with all the power he was given in Egypt. There are so many lessons that could be learned from Joseph & Moses! Thanks for stopping by! 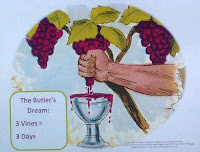 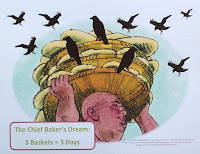 Review: This is our last week that we will be learning about Joseph. His brothers sold him, and the traders took him to Egypt where he was sold again to Potiphar. Last week, the butler and chief baker were put in prison with Joseph. Joseph told them what their dreams meant. 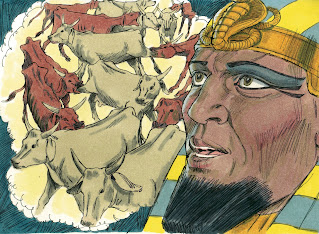 When Pharaoh needed his dreams interpreted, the butler remembered Joseph. Joseph told Pharaoh what the dreams meant. They were going to have 7 good years and then 7 years of famine. (Not enough food) Pharaoh put Joseph second in command; Joseph only had to answer to Pharaoh. God was with Joseph. He had two sons.
Joseph stored up all the food he could during the 7 good years and today, our lesson is during the 7 famine years.

This week's lesson is found in Genesis 42-50. During the famine, Joseph’s family is worried about food and decided to go to Egypt to buy corn. Only ten of the brothers went, Benjamin didn’t go.  Joseph is the governor (or prince) of Egypt. Remember, everyone had to talk to Joseph in order to buy food in Egypt.  When they went before Joseph, and bowed, he recognized them, but they didn’t know who Joseph was. Joseph asked them “Why are you here” and the brothers told Joseph that they wanted to buy food. Joseph said “No, you are spies.”
They told Joseph that they were brothers and the youngest was still at home with their father.  Joseph told them to send one brother home to get the youngest and the others would have to stay in Egypt until they proved they were not spies. The brothers started talking to each other saying that this was punishment for what they did to Joseph. Joseph was using an interpreter so the brothers thought he couldn’t understand them, but when Joseph heard what they said, he had to turn away to cry. 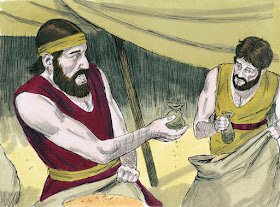 Joseph tied up Simeon and had his brethren's sacks filled with the corn and he ordered the money they brought to be put in the sacks. When the brothers went to feed the animals, they found the money. Joseph's brothers almost passed out! (Genesis 42:28) They were so scared to find the money in the corn sacks!

They told their father that the governor of Egypt talked mean to them and accused them of being spies.

When the food ran out again, the brothers worried about returning to Egypt for more food. But Egypt was the only country with food to sell. They told Jacob that the governor told them not to return unless they brought their youngest brother.

The brothers returned to Egypt and told Joseph’s servant that they had returned with the money that was in their sacks last time and enough money to buy more food. Simeon was brought out to them. Then, the brothers were taken into Joseph’s house and waited until noon to see Joseph.

They bowed at his feet (just as Joseph's dreams said they would!) and Joseph asked how they were and is their father still alive? They told Joseph that their father is good and then Joseph looked up and saw his young brother, Benjamin. 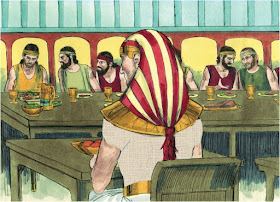 Joseph had to leave, because he was so happy to see Benjamin, he wanted to cry.  Later, Joseph fed his brothers and sent them gifts. Joseph sent Benjamin 5 times the gifts that he sent to his other brothers.
Joseph had their sacks filled full of food. Again, he had their money put in the sacks and he had his silver cup put in Benjamin’s sack. After just a little time passed, Joseph had his servants follow the brothers and ask them if they repaid Joseph by stealing from him. Joseph's servants searched every sack and found the money and silver cup. When Joseph told them that the one’s sack that held the silver cup would have to stay and be a servant, they said that they couldn’t do that. They told Joseph that their father would die if they came back without Benjamin. 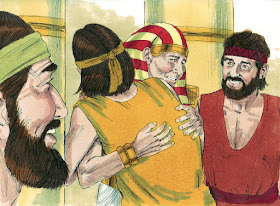 Joseph started to cry. He sent all of his servants out and with only his brothers left, Joseph told them that he was Joseph, their brother! He said not to be upset, because it was God’s plan for him to be in Egypt during this famine. Joseph hugged Benjamin and told them to bring their families to Egypt to live because there was still 5 years of famine, and he didn’t want them to die. 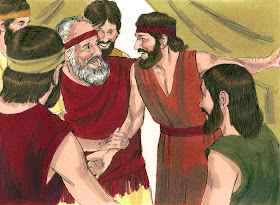 Joseph gave his brothers wagons and food to get back home. When the brothers told Jacob that Joseph was still alive and governor of Egypt, Jacob couldn’t believe what they were saying. Jacob decided to go see Joseph. He was 130 years old.

Joseph climbed in his chariot to go see Jacob when he arrived in Egypt, and they were so happy to see each other! Jacob went before Pharaoh and after they talked, Joseph took his family out to the best land in Egypt. Pharaoh told them to live there.
Jacob was able to meet Joseph’s 2 sons Manasseh & Ephraim. Jacob lived in Egypt for 17 years before he died (147 years). Joseph was 110 when he died, and he was buried in Egypt. 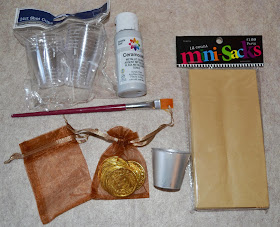 For the kids take home, I used the above brown bags (far right, at Hobby Lobby) and we put corn inside. I found the clear glasses at Dollar Tree and used the silver paint to paint them. I gave them a money bag for that part of the lesson, then they added the silver cup at the correct time. The brown money bags I purchase on eBay a lot cheaper, and they come from out of the country, so give yourself time if you plan to buy them that way. 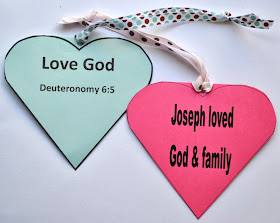 Today's project is a quick one but is a great reminder to love God and our family. Joseph put God first and obey Him, and he still loved his brothers even though they sold him into slavery. These are in black & white so they can be printed on color cardstock/paper. Cut the 2 large hearts as one so it can be folded in half. I used a hole punch and added ribbon so the kids can hang on these on their door handles. Or you can just fold them like a card. The kids will have heart stickers to add to them, or you can let them draw and color hearts. (The photo shows the front & back.) You can print it here. 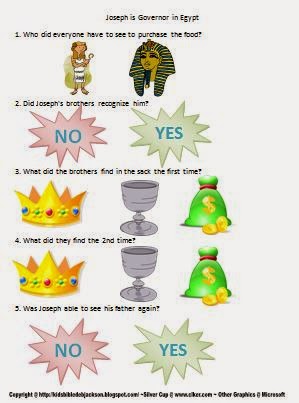 Click here to print.
You can print all the Genesis worksheets here. 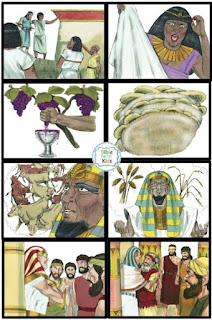 Click here to download the 30 updated visuals.
This is a variety pack for Genesis 39-46 since it covers so much!
There is a visual(s) for each event that is in these chapters. 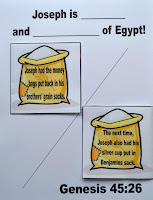 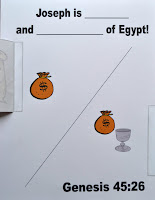 Here is the cut & glue lift-the-flap worksheet that can be used by itself, or with the lapbook printables. 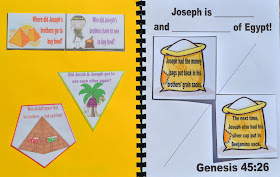