Today's lesson is The Judges in the Old Testament. There are several options for this lesson, depending on how much prep time you want to do. There is also a bulletin board that can also be used as visuals.

You can print the above Judges posters here. 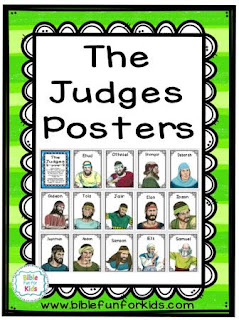 This is an updated set of Judges Posters with Sweet Graphics.
Click here to download this set. 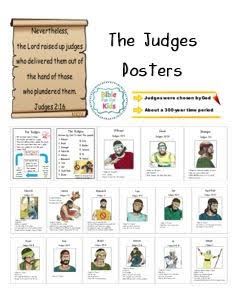 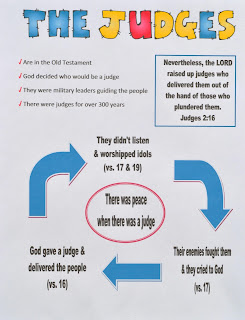 
Today we are going to study the Judges found in Judges & 1 Samuel 4-7. They are found in the Old Testament in the book of Judges! The judges were people that God picked to take care His people when they were in trouble. They acted like military leaders guiding the people. The people would win a battle, then eventually stop following God's laws and start worshipping idols. The judges take place over 300 years. Find a more in-depth answer here. 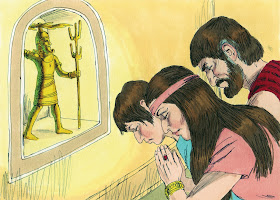 We studied Joshua last week, and the judges begin sometime after he died. He was the leader after Moses. Judges 2:16-19 tells us that while the Israelites were under the leadership of a judge, they were faithful, but when there wasn't a judge, they turned away from God and worshipped idols. Then, they cried to God to save them and He answered their cries with a new judge.
1. (Judges 3:9-11) The first judge was Othniel. He was Caleb's younger brother. He went to war for the people and they had peace for the 40 years he was a judge.


2. (Judges 3:12-30) When Othniel died, the people turned away from God and had to serve Eglon King of Moab for 18 years, they cried to God to deliver them. God picked Ehud and he was left handed. Ehud made a dagger and killed King Eglon. Ehud escaped and blew a trumpet in the mountains. He told the people to "Follow me, for the Lord has delivered your enemies to you." They fought and killed about 40,000 men of Moab. They had peace for the next 80 years.
3. (Judges 3:31) Next is Shamgar and we only have one verse about him. Shamgar was the son of Anath, and he killed six hundred men of the Philistines with an ox goad; and he also delivered Israel. We are not told how long he was a judge for. 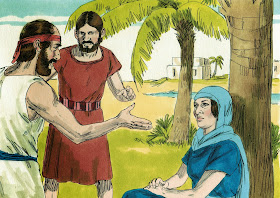 4. (Judges 4-5) The next judge is Deborah. She is the only woman judge. She was a prophetess and was married to Lapidoth. Deborah would sit under a palm tree in the mountains and the Israelites would go to her. She sent for Barak and told him that the Lord said to take 10,000 men to fight Sisera and they would win. Barak told Deborah that he would only go if she went also. Sisera gathered up his 900 chariots and all his people. Barak and his people killed all of Sisera's people, but Sisera escaped. He hid in a tent and when he fell asleep, a woman named Jael shoved a tent peg through his temple! Deborah was a judge for 40 years. 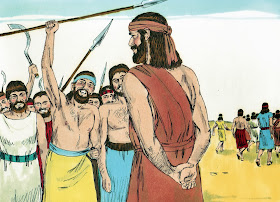 5. (Judges 6:11-chapter 8) The next is Gideon and he was a judge for 40 years. We are not going to discuss him today, because we will study him next week. 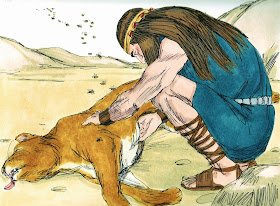 12. (Judges 13-16) The next judge is Samson. He was a judge for 20 years and was the strongest man in the Bible. We will not talk about him because we have 2 lessons coming soon about him. 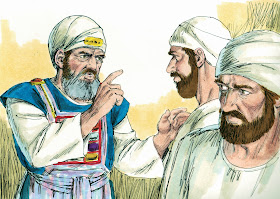 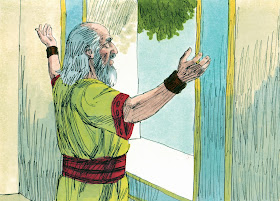 14. (1 Samuel 7) We have Samuel as a judge. We are not told how long he was a judge for. We are having a lesson about Samuel, and Samuel will lead us into David.

Why isn't Abimelech listed as a judge in the printables?

After a lot of study on the judges, I did not add Abimelech as a judge. But decided to add this comment as to why, after I received several comments. My main reason is the Bible verse: Nevertheless, the Lord raised up judges who delivered them out of the hand of those who plundered them. Judges 2:16  God picked who He wanted as the judges, and the first couple of verses of chapter 9 tell us that Abimelech talked bullied his way into being a leader, and is made 'king' by the men of Shechem (9:6). In verse 22, we are told that Abimelech ruled for 3 years. Again, he was self appointed and considered himself a ruler. After a lot of time spent on this, I can't get past the fact that God didn't pick him to be a judge.

Something else to keep in mind, I was talking to a teacher about Jonah and explained that the Bible doesn't say whale, it is a mistranslation in one version. She said "But, I have always taught it like that!" And, I replied "But, that doesn't make it right." She agreed.


For more information, here is a fantastic bio about Abimelech written by Dave Rogers, the Minister at Fayetteville Church of Christ in Fayetteville, Georgia.
Abimelech (Judges 9) is never described in scripture as being one of the judges of ancient Israel.  One of Gideon’s many sons, he was born to the concubine (a kind of “second-class” wife) Gideon had married in Shechem (Judges 8:30-31), and he seems to have been Gideon’s only son by this particular woman.  (Note that Gideon had fathered some SEVENTY other sons, by the many other women he had married, Judges 8:30.)  Upon his father’s death, Abimelech solicited support from his mother’s family in a bid to become the ruler of Israel (Judges 9:1-3), presenting his lust for power as a stark choice between being ruled by himself (to whom they were related) or being dominated by his brothers, whom he essentially presented as “outsiders.”
With the financial backing of his mother’s kinsmen, Abimelech hired a group of thugs to assist him and then brutally executed all of his half-brothers except Jotham, who managed to escape.  Judges 9:22 says that Abimelech “reigned” (a word which means he exercised power, acting as a kind of “prince” or self-appointed “royal personage”) over Israel for three years, but it is important to note that the Bible never calls him a judge, nor does it ever imply that he acted with God’s authority.  In fact, the very opposite seems to be clear, since the account of his actions in Judges 9 makes it plain that God’s intentions for Israel were contrary to Abimelech’s ambitions (cf. Judges 9:23-24 & 56-57).
Thank you Dave Rogers for writing about Abimelech and permitting me to post it here.

Click on the above picture to view and download worksheets, a lapbook and printables for a bulletin board and /or visuals!