We are starting a new quarter with Elijah. I have divided Elijah and Elisha into six lessons, and I am using a lapbook for review. You can see that link at the bottom. 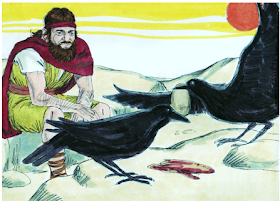 We are continuing our study in the Old Testament.  Today we are learning about Elijah. Elijah was a prophet of God. King Ahab was the king of Israel in Samaria for 22 years.  King Ahab's wife was Jezebel. King Ahab was a bad king, he did more evil in God's sight than all the kings before him! King Ahab worshipped the idol Baal and he made an altar for Baal in the temple of Baal in Samaria. He also made a wooden image! King Ahab did more to make God angry than any other king!


Elijah told King Ahab that there wouldn’t be any dew or rain, unless Elijah asked God to send rain. God told Elijah to go hide by the brook called Cherith.
Elijah would be able to drink from the brook there and God will have the ravens feed Elijah there. So, Elijah did what God said and ravens brought him bread and meat in the morning and the evening. Elijah drank water from the brook. 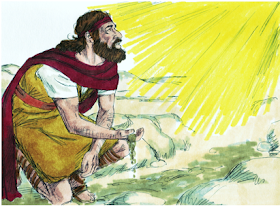 After a while, the water in the brook dried up from the drought, so God told Elijah to go see a widow and she would feed him. (Explain widow) 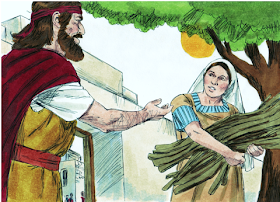 When Elijah reached the city gates, Elijah saw the widow just as God had told him. She was picking up sticks and Elijah asked her to bring him a little water in a cup. As she turned to go get him the water, he also asked for a piece of bread. But she told him that she only had a handful of flour and a little oil in a jar left. She was gathering sticks to make the last loaf of bread, and then her and her son would die because that was all the food she had left. 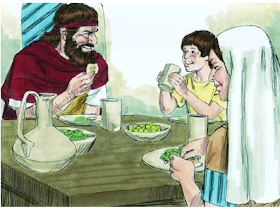 Elijah told her not to worry. He said “Make me a small cake first and bring it to me, then you can go back and make more for you and your son.” The Lord says that your bin of flour and your jar of oil will not be used up until it rains again. And that’s what happened! The widow and her son had enough to eat! 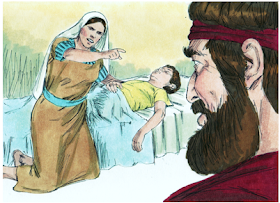 After a time, the widow's son became so sick that he died. The widow asked Elijah “What have I done, Prophet, that my son would die?” Elijah replied to the widow “Give me your son.” Elijah took him from the widow's arms and carried the widow's son to the upper room where he was staying and Elijah laid her son in the bed where he slept. 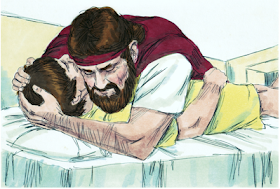 Elijah cried out to God asking Him why the son died while he was staying with them. Elijah stretched himself on top of the son 3 times begging God to save his life. God heard Elijah and the son breathed again.

Elijah and the widow's son went back downstairs and told her that "Your son is alive!" The widow told Elijah that because of her son living again, she knew he was a man of God and that Elijah speaks the truth about God.
Next week we will continue our study of Elijah. Elijah will prove God's power over the idol Baal. 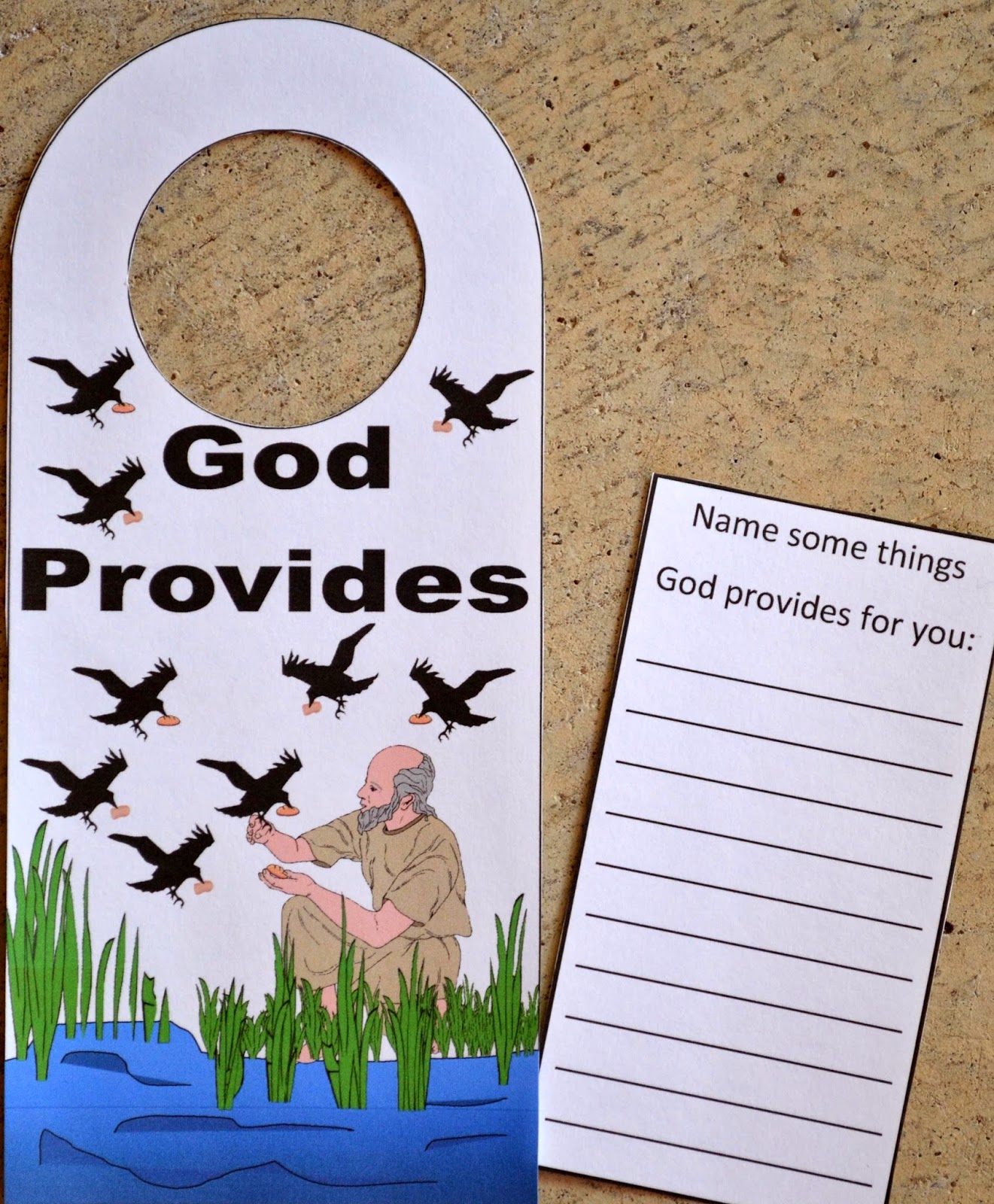 Today's project is a door hanger. I cut the centers out and let the kids cut the rest. The rectangle with lines is for the back of the door hanger. I used it for discussion after the lesson.
Click here to print it. 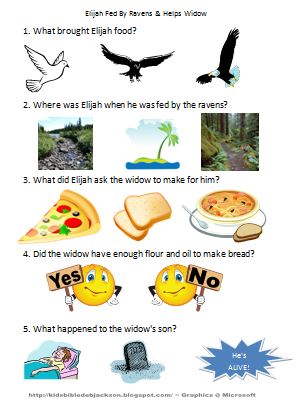 
I used this bulletin board for this lesson.
Click here to see the how-to and free printables. 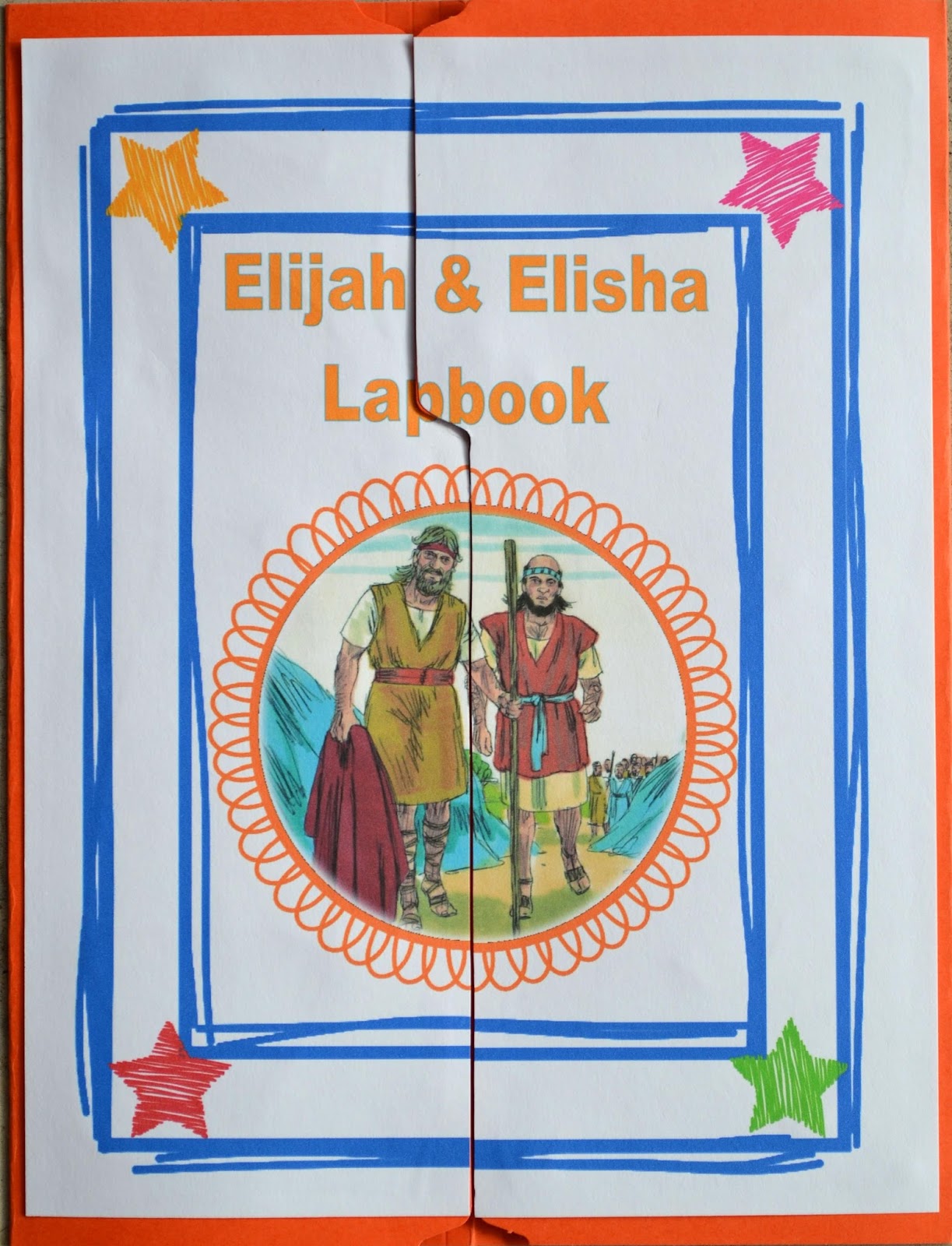 This lapbook is being used with each of the Elijah and Elisha lessons.
Click here to see it.
Bible Verse:  1 Kings 17:4