Jesus went to His disciples at night during a storm. They didn't know who it was on the sea, but when they saw it was Jesus, Peter walked on the water to see Him! He was fine until he took his eyes off Jesus...

After Jesus sent the crowd away, He went up into the mountain by Himself to pray. When night came, He was by Himself. Jesus had found out that John had been killed. Do you remember who John was? John and John were related & the one who baptized Jesus So Jesus is upset and wanted some time to be alone and pray.

The boat with the Disciples on it was in the middle of the sea. They had rowed the boat about 3 ½ miles. There was a storm and their boat was being tossed around by the rough waves.

It was about 3:00 during the night and Jesus saw them having trouble rowing the boat and so Jesus went to them. He knew they were in trouble and scared and He went to comfort them. He actually walked on the water to them. Verse 25 in Matthew states that He walked on the sea!

When the Disciples saw Jesus walking on the sea, they were scared and thought He was a ghost! They cried out in terror! But Jesus instantly told them to be happy and don’t be afraid!

When Peter got out of the boat, he walked on the water to Jesus!

The Bible doesn’t say swim, Peter walked ON the water! But when Peter saw that the wind was strong he became afraid and started to sink. Peter had taken his eyes off of Jesus and let himself be distracted by the waves and the sea. He yelled to Jesus “Lord, save me!”

Immediately Jesus stretched out His hand and caught him and asked Peter "Why did Peter have such a small amount of faith to doubt Him?"

When they returned to the boat, the wind stopped. The people in the boat came to Jesus and were amazed at what He could do. They worshipped Jesus and said “Truly You are the Son of God.” (review Bible vs. 33)

**Let the students have 2 marbles, 1 for Jesus and 1 for Peter. Have them put each marble in a bowl of water. What happens when you put the marble on the surface of the water? [it will sink] What happens when you go into the water? You either swim or you will sink. We are going to talk about two people that walked on water! I used the (rounder) river bed stones from Dollar Tree. Original idea found here. They really liked doing this, and it was a good discussion starter! 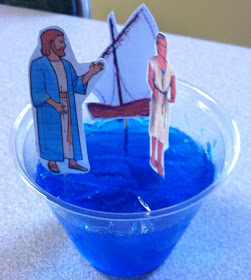 Download Jesus, Peter and the boat here.
The kids love this project. As I teach the lesson, they add each piece. I gave each child a handful of Goldfish (brand) and they added to the water and had some to eat! I taped a toothpick to the backs of Jesus, Peter and the boat. Each box of blue Jell-O made 3. Also, put plastic on the top to keep the yucky white stuff from forming! 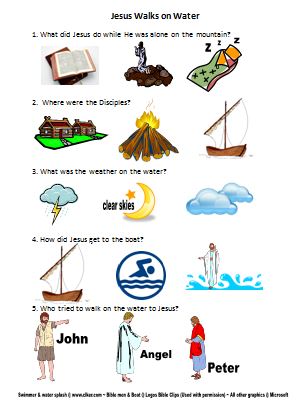 You can print the worksheet here. 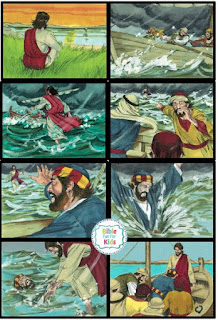 This is the workbook, lapbook style on the left with question on the top and lift the flap to write the answer.  When they come into the classroom, and we are waiting for everyone to arrive, they can glue down the picture for the days lesson, which is the right side.

There are 3 lapbook printables for this Bible lesson. You can print them here:   Pray    Storm     Peter

This is the printable for today's lapbook worksheet. Students will cut out the boat, Jesus and Peter and glue onto the worksheet. You can print it here.
You can find all the download links for the Life of Jesus lapbooks and the lapbook worksheets here.
Bible Verse: Matthew 14:33