Review: We talked about Ananias and Sapphira. They lied about selling their land to Peter, and Peter said they weren't lying to him, but to God. We talked about Philip. He taught the Bible to the Ethiopian Eunuch and he went all the way down in the water to be baptized. Last week we learned about Cornelius. Remember that Peter was praying on a flat roof and went into a trance. He saw heaven open up and a giant sheet, tied at the four corners, came down three times. It had all different kinds of animals on it. We have studied about Stephen and how the people taught others about Jesus. The people laid their clothes at Saul’s feet and stoned Stephen to death. That leads us to Saul and his life. 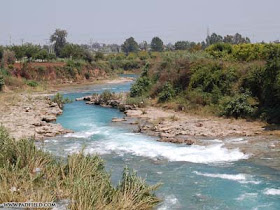 
We read from Acts 8:3 that Saul caused destruction for the church. He went into people’s houses and dragged men & women to prison. He was threatening people and murdering them for telling about Jesus. Saul grew up in Tarsus and was a Jewish leader and was very smart. He was glad to see people dying because they told about Jesus. He was still following the Old Testament rules.

Today's lesson is found in Acts 8:3; 9:1-19. Saul was in Jerusalem and went to the high priest and asked for letters so he could go to the synagogues in Damascus and bring back anyone that was teaching about Jesus. He wanted to make sure the Christians were in prison.


It was about 140 miles from Jerusalem to Damascus. That would probably take Paul and the other men about 5 or 6 days to travel. As they were traveling closer to Damascus, at about noon, suddenly a light came shining around Saul from heaven. The light was brighter than the normal afternoon sun.

(Acts 9:4) Saul fell to the ground and Jesus said to him: “Saul, Saul, why are you persecuting Me?” Saul asked Him, “Who are you, Lord?” And the Lord answered Saul: “I am Jesus, whom you are persecuting.” Saul was trembling and he was amazed and asked “What do you want me to do?” He was told to get up and go into the city and then he would be told what to do.

The men that were traveling with Saul just stood there speechless! They heard someone talking, but couldn’t see anyone! So Saul stood up and opened his eyes, but he couldn’t see anything. The other men led him by the hand and took him to Damascus.


He was there for 3 days and couldn’t see and he didn’t eat or drink anything. Saul did a lot of praying.


He had some time to think about what he had been doing. He could think about Stephen’s last words before he died from the stoning. Remember, Stephen called to Jesus to “receive my spirit”.

There was a disciple named Ananias in Damascus and the Lord came to him and told him to “Go to a street called Straight and ask about a man named Saul of Tarsus. He is praying. He is waiting for you to come put your hands on him so he can see again.” He said, " Lord, I have heard a lot about this man from many people and how he has harmed your followers in Jerusalem. He has the authority from the chief priests to put us in prison." But Jesus told him that “He is a chosen person to tell others about Me. He will suffer many things for Me and even stand before kings.”

Ananias went to see Saul. Now. He laid his hands on Saul and told him that Jesus appeared to him on the road to Damascus and sent me to give your sight back to you. Immediately something like scales fell from Saul’s eyes and he could see.


Saul stood up and went to be baptized, immediately.

Then Saul ate and got his strength back. He spent time (some days) with the disciples at Damascus. In the next lesson, we will start discussing Saul's work for Jesus. 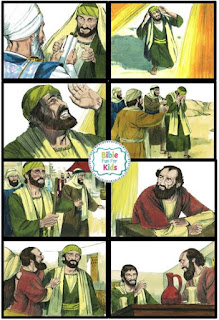