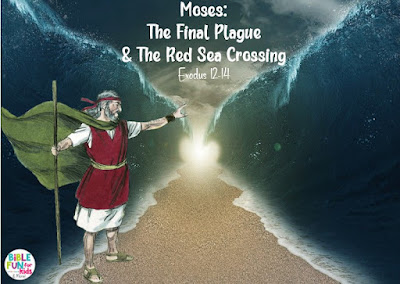 In this lesson, the 10 Plagues are reviewed that we have studied previously and complete the last plague. The Israelites are instructed by God what they are to do to be spared when He passes through Egypt for the 10th and last plague. The people are finally permitted to leave Egypt.

Review: God told Moses and Aaron to speak to Pharaoh. Pharaoh had the Israelites working as slaves and they wanted to be free. God told Moses that Pharaoh wasn't going to let the people go easily, but with His strong power, Pharaoh would let them go. There were 10 plagues in Egypt, here is a quick review:
1. Exodus 7:17 water into blood: all the fish die and no water to drink. After 7 days:
2. Exodus 8:6 frogs…everywhere.
3. Exodus 8:17 lice on all people and animals.
4. Exodus 8:24 swarms of flies
5. Exodus 9:6 all the Egyptian animals died, but all the Hebrew animals lived.
6. Exodus 9:10 boils on all the people and animals
7. Exodus 9:23 God sent thunder and hail and fire
8. Exodus 10:14 locusts the land was dark with them, and they ate EVERYTHING green!
9. Exodus 10:22 Thick darkness for 3 days. So dark they stayed in their homes!
Lesson is found in Exodus 12-14: Now, to finish the plagues! 10. Exodus 12:29 God told Moses that there would be one more plague. And, then Pharaoh would let the people go. 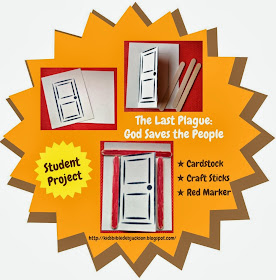 For the final plague, I used Nicole's idea from PTP. I printed the doors onto a tan cardstock and cut each sheet into 4 pieces, leaving the extra paper around the door. I also cut the same tan cardstock without any print and used this for the bottom layer. As you can see from the above photos, I cut the door on the right side and the top, leaving the door connected on the left side so the kids can open and close it. Then, I glued the small craft sticks to the sides, then the top to form the lintel. I will let the kids use a red permanent marker to paint the 'blood' on the door frame. This will be the last item for their 10 plagues bag, and they can take everything home! The doors are black & white so you can print onto your choice of color cardstock. You can print the doors here.
The door visual below was found at Hobby Lobby. I just painted the posts around the door red. 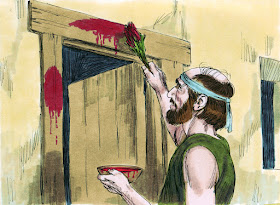 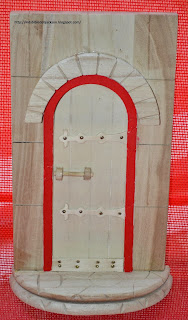 God also told Moses that the people would remember this day every year. They were to take a new, perfect male lamb and use its blood all around the door frame and they should cook the lamb and eat it. God gave specific instructions on how and when He wanted the people to do this. Moses told the people what God wanted them to do, and if they did exactly what God said to do, then He would pass over their house that night. The memorial they did every year after that was called the Passover. Because God passed over.
The Lord went out about midnight and all the Egyptian firstborn died, even the firstborn animals in every home. God's people had killed a perfect male lamb and put the blood on the doorframe (top & sides) and the Lord passed over their home and didn't kill anyone in their homes. (See below) That night, Pharaoh finally decided to let the people go.
For the Lord will pass through to strike the Egyptians; and when He sees the blood on the lintel and on the two doorposts, the Lord will pass over the door and not allow the destroyer to come into your houses to strike you. Exodus 12:23 (NKJV)
Another verse to look at is Numbers 33:4 (NKJV):  For the Egyptians were burying all their firstborn, whom the Lord had killed among them. Also, on their gods the Lord had executed judgments.
For an in-depth interesting look at this Bible verse, please read this. 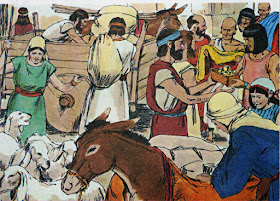 Pharaoh told Moses and Aaron to leave Egypt and they packed up that night and started their travels. The Israelites had asked the Egyptians for gold and silver, and they took those items with them also. 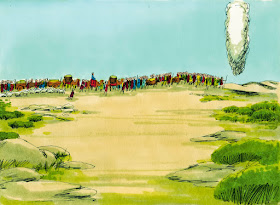 How did the Israelites know where to go? God led them! During the day, He went in front of them in a pillar of cloud. 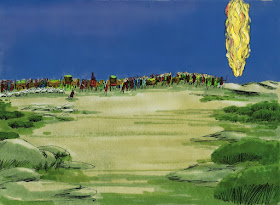 And to lead the way at night, He went in a pillar of fire to give them light. 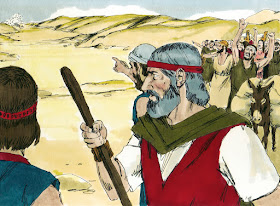 God had told Moses that He would harden Pharaoh's heart. So, after Pharaoh thought about what he had done, he decided it really wasn’t a good idea to let the Israelites leave since they were the workers that served the Egyptians. Pharaoh gathered up 600 of his best chariots and the chariots with captains and he chased after the Israelites.
The Israelites were really scared when they saw Pharaoh’s army coming after them, but Moses said that God would watch over them.
Here is more information that is from my minister Tim Alsup that will help with this lesson:
Verse 27 says the sea went back to its normal course “when the morning appeared,” meaning the Israelites crossed in the darkness, and apparently the Egyptians followed in the darkness as well.  I had always pictured it as both the Israelite and Egyptian camps stayed put all night long, separated by the cloud/fire, but it sounds from verses 23-25 like they were indeed separated by the cloud/fire, but they were both going through the sea in the darkness.  In the “morning watch” (v 24) the cloud/fire began causing problems for the Egyptians, who began to be afraid.  My NASV study Bible states in 1 Samuel 11:11 and Matthew 14:25 that the morning watch was the third watch, from 2 am to 6 am.  And then as the morning came the sea went back, wiping out the Egyptians.
Both camps traveled through the sea in the darkness, with the cloud helping keep the Egyptians back long enough for the Israelites to cross, rather than the cloud forcing the Egyptians to stop for the night. 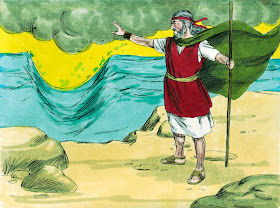 
The water rose up and divided, the Israelites walked across the Red Sea on dry land.

With the Israelites and the Egyptians separated by the pillar of fire and cloud, they were all traveling through the sea on dry ground during the night. There was a wall of water on each side of them as they crossed!
All the Egyptians followed them, but God wanted to slow them down. God made their chariot wheels stick (translation?), and they had trouble driving them!
In the early morning, and once the Israelites crossed through the Red Sea, God told Moses to stretch his hand back over the water and the water went back down. The Red Sea covered all the Egyptian men and chariots!  Every single one of them! The Egyptians all drowned in the Sea, and the Israelites saw the power of God once again!
We will continue Moses next week and will study more about God's care for the Israelites. 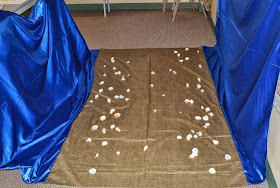 For the floor Red Sea Crossing above, I purchased 4 yards of the shiny blue fabric and 2 yards of fabric for the dry ground. Cut the blue fabric in half, so you have 2 pieces 2 yards by whatever the yardage is (48"?).  If your 'water' fabric frays like mine, I folded over the edges and sewed the sides where I just cut. Then, as you can see from the photo, I sewed each piece to the sides of the 'dry ground'. You don't have to sew it if you want to use the fabric with other lessons. I laid the dry ground down and threw out shells for the kids to pick up as they crossed. Then, I covered the dry ground with one side of the water. The other side, I clamped to the wall just to make it easier to work with during the lesson. We held the other side and made it wave, but it could be laid over chairs. The teacher for the 4-year olds used a blue sheet and laid a felt strip in the center, added the shells, and covered it up and that worked well also. You could just use a towel for them to walk on and the sheet for the water on each side. This is another idea from Nicole.

This is a basic visual for this lesson! I am sure everyone has used this visual and student project before! I saw the glitter on the fire on a post on Pinterest, but it is a dead link, so I cannot give credit to the owner for it. I save the cotton strips from medicine bottles and used those for this project on the day cloud side. For the teacher's visual, my husband asked the guy at the paint counter at Lowe's if we could buy a dozen paint sticks for Bible class... he just gave them to me! I used some for creation and had one for this. I used the large craft sticks for the kids. I put the kid's projects together, since there is so much for this lesson, and I will let them add the cotton to the day side. I also used red, yellow & orange glitter glue of the students pillar of fire to add sparkle. I just followed the basic shape with lines. Click here to print the teacher's visual and the student project. 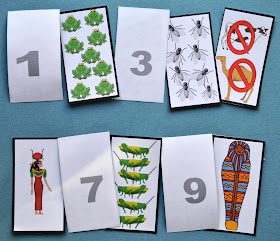 This week's 10 Plagues review is a set of flashcards. I printed side one with the pictures and turned it over and printed the numbers directly on the back of the cards, as you can see from the photo above. You can print it here.﻿ 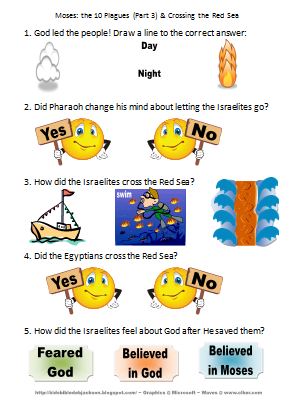 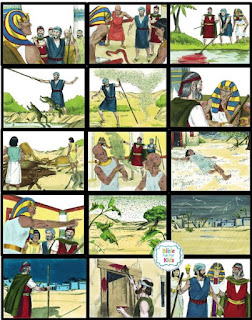 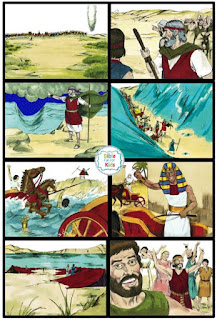 You can find all the Moses worksheets here. 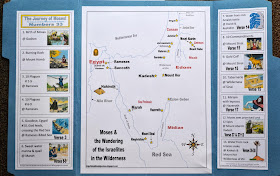 We marked our Moses map for his travels. You can find more information here. 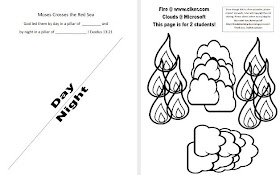 Click on the picture to print the Cut & Glue worksheet.

Click here to see all the Moses Cut & Glue worksheets and the Pictures to Color. 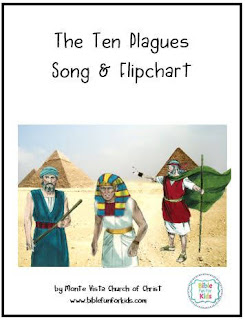 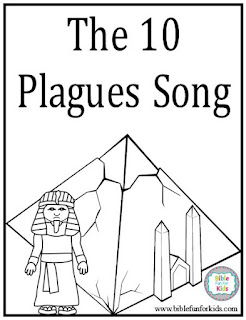 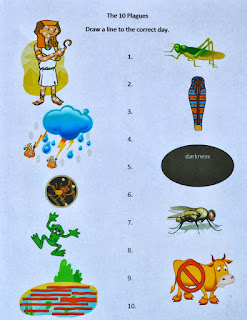 Click here to see the Moses PTP by Nicole mentioned in this post.
For more on the 10 plagues, please look here.