This week we discuss Peter being set free from prison. God sends an angel and they walk right past the guards! There is a game  to play and review for the lesson. The game can be used just as a game board, or it can be used as a file folder game. It is short but should really help make the review fun for the kids!

It was three years after Jesus was crucified, and King Herod decided to harass the Christians. He had James the apostle killed, and because that made the Jews happy, he decided to kill Peter also. The scripture for today's lesson is Acts 12:1-19.


King Herod had Peter arrested and put him in prison and then Peter was taken to four squads of soldiers (16 men) to guard him while they waited for him to be brought to trial.

Peter was kept in prison, but the Christians were constantly praying to God. Luke tells us in verse 5 that the church was praying for Peter. A church building can't pray. The people are the church.

Peter was asleep the night that King Herod was ready to take him out of prison to go before the people. He was between two soldiers and was tied up with two chains. There were also guards at the door of the prison.


An angel from God stood by Peter, and there was a light shining in the prison. The angel hit Peter in the side and sat him up telling him to "Hurry, get up!" The chains fell off of Peter's hands.

The angel told him to get dressed and put on his sandals. When Peter was ready, the angel said "Put on your coat and follow me."  Peter followed the angel, but he wasn't sure if what the angel had done was real, he thought the angel might be a vision!

The angel and Peter went past the first and second guard posts and they came to the iron gate that lead into the city. The gate opened by itself and they went out and went down one street, then the angel left.


Peter finally realized he wasn't dreaming and knew that God had sent one of His angels to help him! The angel saved Peter from King Herod and the Jewish people that wanted to kill Peter.

After Peter thought about it, he went to Mary's house. She was the mother of John 'Mark'. There were a lot of Christians there praying for Peter. He knocked on the door of the gate and a girl named Rhoda answered.

When she recognized Peter's voice, she was so excited that he was there, she didn't open the gate! Instead, she ran in and announced to everyone that Peter was at the gate! They did not believe her, but Rhoda kept telling them that Peter was really outside at the gate. They said "It has to be his angel."

But, Peter kept knocking and when they finally opened the door, and saw that Peter really was outside , they were amazed! Peter motioned with his hand to be quiet and he told them how God had sent His angel to get him out of prison. Peter told them to go tell James and the other Christians what happened , then Peter left to go somewhere else.

I created something a little different for this lesson! You can print one (or more for bigger classes) and use with the class or print enough for the students to take home as a file folder. If you are using at home, or using as a file folder game, there is a cover to print. This is a very short game and the directions are in the download.
Click here to download. 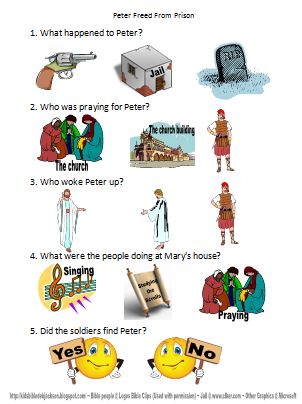 Each week for this series of Acts, I will have something for the students to add to their IFA bag, Click here to see more. Some items will be purchased and some will be printables. For this week, I found binocular foam necklaces at Hobby Lobby. You can find plastic ones here, but they were too much for me. I have created a pattern if you would like to make your own set. You can cut out foam or print onto cardstock. You can find string or plastic cord in any craft isle to attach to them. Also, there is a perfect area to write a scripture on these! Click here to download. 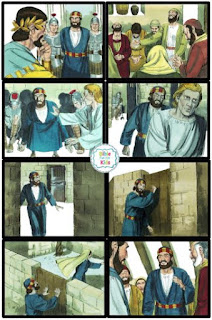